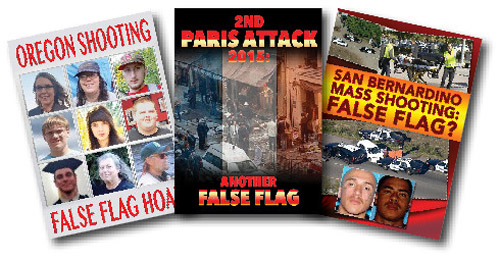 False flag operations, and in particular false flag mass shootings, are the flavor of the recent years in the USA. Barely a week goes by in America without some kind of mass shooting occurring. However, what the Government and MSM (Mainstream Media) are not telling you is that every single one of them – without exception – are staged events that are pre-planned and coordinated by a criminal cabal behind the scenes. Mind-controlled patsies are trained for the role of mass shooter, or innocent people are framed, while the real conspirators role out their agenda of terrorizing the public, making the average person feel scared wherever they go, promoting gun control and tricking you into giving up your rights for (supposed) safety. These events have become so staged that the NWO controllers have even resorted to using fake blood, fake bodies and fake victims (crisis actors) – as with Sandy Hook and the Boston Marathon. However, as long as a shellshocked public is not wise to these schemes, these mass shootings will keep being rolled out until the public is brought the brink of anger, grief and desperation, shouting for the Government to save them. It is imperative that you get informed to this nefarious agenda, so that you can see through it and help those around you too. 3-DVD Set $33.00 (Order# 9827)
$33.00
$33.00
Quantity:
ADD TO CART