#5201
Some of the Deep Underground Military Bases in America - Report 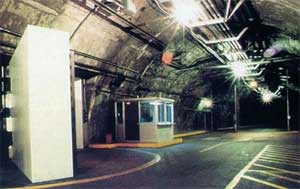 Unknown to most Americans is a dark secret, and it’s right under our noses. It’s the reality of the existence of over 120 known DEEP UNDERGROUND MILITARY BASES situated under most major cities, US AFBs, US Navy Bases and US Army Bases, as well as underneath FEMA Military Training Camps and DHS control centers. Almost all of these bases are over 2 miles underground and have diameters ranging from 10 miles up to 30 miles across! The secret government has been building these bases day and night, unceasingly, since the 1940s. These bases are basically large cities underground connected by high-speed magneto-levity trains that have speeds up to 1500 MPH. Many people have died trying to expose the reality of these bases. This report give a lot of details about the location of these bases and how they are going to be used during the coming holocaust against American citizens who don’t tote the line when martial law is declared. Report reveals the location of all 120 bases. Know where they are and stay alive. $11.00 (Order# 5201)
Purchase as download
$11.00
$11.00
Quantity:
ADD TO CART